There hasn't been a lot of activity on this blog for several months.
Time for a re-think and new direction? 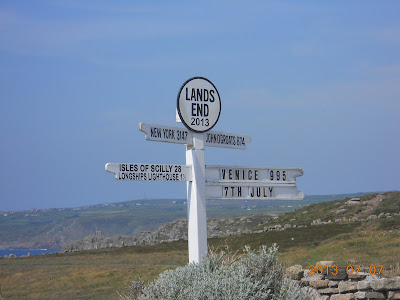 Thanks for landing here.  Not quite sure if this is the end for this blog as I've been writing more frequently over at www.middlefocus.com and www.francofiled.org where you are welcome to join the conversations.
What I'm after is some synergy across the blogs. A Venn segment where contents interact.
Where different destinations come together in one post.

The Writing was on the Wall 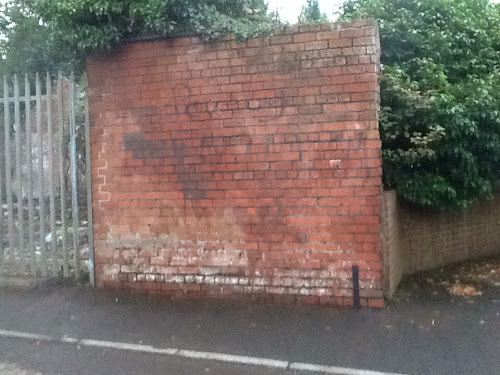 Just finished a meeting with local community representatives. They had planned to stay an hour but remained for over twice that time. I'm glad they stayed. You see our normally very quiet neighbourhood has had a spate of ASB, anti-social behaviour and we want to snuff that out before it develops further. The reps who called to see us, have been through this many times before in other neighbourhoods. They came with sound, practical advice and brought hope that something could be done and done quickly.

Some properties nearby had become derelict and have been acting as a magnet for young people who apparently have nowhere else to go or things to do. We should have seen it coming; the writing was on the wall. A property starts to fall into disrepair; previously tended gardens become overgrown; the first grafitti appears: these are the warning signals to act quickly and get something done. And getting something done means speaking to community activists. They have the knowledge, understanding and skill sets to make sure that the right agencies are engaged from the word go.

If you are troubled by something like this check out online services such as www.writetothem.com When you land on the web page you'll be asked to type your postcode and immediately you are provided with lists of your various representatives; Councillors, MPs, MLAs and MEPs. Rather than going it alone to wage a solitary campaign against the powers that be, it makes sense to enlist the support of public representatives who have greater clout in holding local government officials to account.

The reps this evening suggested drawing up a short action plan, first things first then others in time. That much maligned Health and Safety trumps ASB, so we will be making a start at securing problem buildings and grounds. We'll take things from there, bit by bit.

The writing's on the wall. Or rather it won't be. 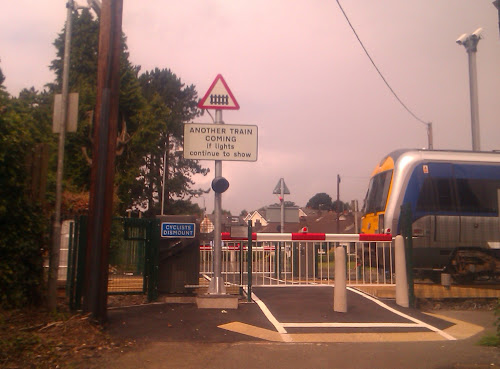 The railway crossing at the end of our street has had some improvement work done. The old zig-zag gate has gone, replaced by an automatic barrier on each side of the tracks. The crossing is now a lot easier to manage for elderly residents and pram-pushing parents who can now make their way straight across in much less time than before.

The zig-zag gate not only presented a mobility challenge for some users but was easier for the more foolhardy to cross the tracks against warning signals that a train was coming. I often wondered why they did that and apart from lack of care and attention, I think it may have had to do with impatience with the klaxon that would sound for the duration of the coming and passing of the train. On the new crossing, the physical barrier does away with the need for a continuous warning sound and the klaxon only operates for the few moments it takes for the barrier to descend. Great for nearby homeowners who will certainly notice the difference.

The engineers obviously had safety and security high in mind when they designed the new layout. Surveillance cameras, four, scan the crossing so if any mishap were to occur then appropriate action could be taken. And there are still rules. Cyclists for example are instructed to dismount before crossing. Several, perhaps enjoying their liberation from the zig-zag gate, ignore the warning and pedal on through; an inconsideration of elderly crossers who find it intimidating.

Crossers are all in agreement, the new layout is a great improvement as long as it is used properly. Used properly? There you have it. Another improvement idea: Train for railway crossing.

Looking for the bird 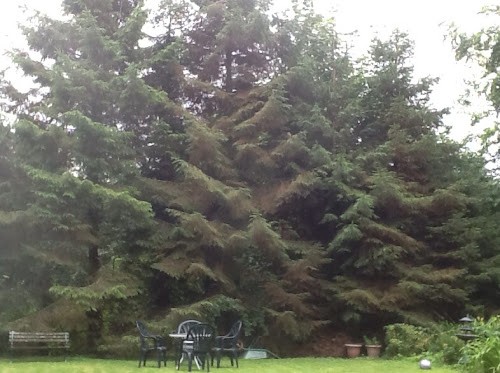 There are lots of trees near our home and the morning air is filled with the sounds of birds that inhabit them. Many different varieties are regular visitors to our garden and bring with them their instinctive pecking order. Recently there have been some brightly coloured newcomers that we did not recognise and decided to look up in a reference book of birds.

While the book might be a helpful reference for experienced bird watchers it's not so practical for us as the pictures are in black and white. More practical is a no longer updated reference point on a BBC website page It not only shows colour pictures but provides a sound recording of each bird.

Listening to those recordings brought to mind a piece of advice i was once given on how to slow down a busy lifestyle and be in the moment. The advice was simple: When you hear a bird, look for it.

Now that's easy for the large doves that think they own our property and for the magpies that cackle noisy warnings of approaching cats. It's a different matter for those smaller birds singing from those nearby trees. They are not that easy to find and it can take five minutes or so before eventually spotting one.

The advice is sound. The search is relaxing and takes your mind from everyday concerns for a while.

Got 5 minutes? Why not spend them in the "hear" and now? Lack of exercise is the new smoking in health circles. Media coverage this week reports that for the good of our health we should reduce alcohol consumption and increase physical activity. I've no doubt that those glasses of wine add to the waistline and have made a determined effort to moderate things on that front.

It is relatively easy to take a glass or more relaxing in front of the TV but more difficult to exercise and get to that slightly out of breath stage for a half hour each day. The real gains probably involve reducing inputs and increasing outputs.

Why do we not know this? Or if we do why do we not take it into account and act accordingly?

I did one of those online surveys that reports biological age in relation to chronological age and found that I was two years out. On the wrong side of the equation. I decided that i needed to take action if I was to stay on this journey of improving with age. I've always liked gadgets and had a pedometer that I wore on my belt like a fashion accessory. I used to keep a weekly record of how many steps I'd taken. Locating the not-recently used device I discovered that it must have worn out as it was no longer working. Over-used maybe? Don't think so.

So I got this new one and liked it immediately. It has an interesting feature that resets itself to zero each midnight although you can click back to see previous daily totals. Each day is a fresh start and a new challenge to step things up a bit.

The online survey I mentioned encourages new eating, drinking and exercise habits and once these are formed they can begin to rebalance that chronological/biological age equation. It seems a couple of hours exercise on a regular basis can add many times that number in days to life expectancy.

It strikes me that is a more than fair exchange for the effort spent, and one totally in step with improving with age. 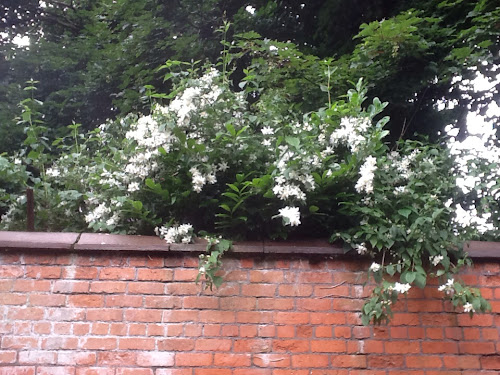 It's July and despite our mixed up weather the Philadelphus shrub just like clockwork has popped its blooms and scattered its scent over our garden wall.

Nicknamed Mock Orange it appears with lilies of the same colour and which will be much in evidence during the marches also associated with this month.

It has been rain, rain and more rain these past few weeks and while yet more is forecast, perhaps the Philadelphus heralds some warm sunny days ahead. It wouldn't put its head over the wall to mock us. Would it? 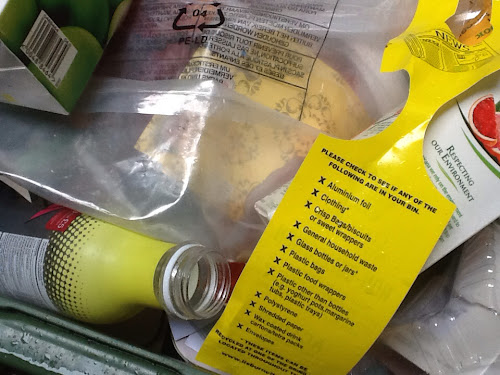 It was a Victor Meldrew moment. At first I didn't believe I was seeing the yellow action tag attached to my green recycling bin. It couldn't be, as I'm careful about recycling items. I know about glass bottles, pizza cartons and other items. I check for recycling symbols and am not one of those who thinks I'm doing someone else's job on the cheap. But sure enough there was the yellow tag and my green bin was "contaminated".

I was away and missed the last collection a fortnight ago. That means the bin is full with a month's worth of packaging of some sort. The action involves going through the bin checking contents against a list of non-recyclable items and removing them. I can take those elsewhere for disposal and leave my bin out again in two weeks. What would Victor have done? Dump it in the black bin? Give off?

Now I'm improving with age so I want to learn the lesson from this. So I probably wil do some resorting over the days ahead. When I do that I'll be checking what it says on the packaging against my council's list of non-recyclables. And here's my suggestion for improvement. If a checklist is going to be tagged to a bin because a collector spotted something then help us to help you by ticking it so we know what the offending item is. Instead of a long list of exclusions why not simply say unless your item has a symbol don't recycle it? And tell the manufacturers! I've already identified one item that's in my bin, on the list and doesn't have a symbol. I'll be looking out for that in future.

If it is also the case that some items carry recycle symbols but cannot as yet be processed in our area then let us know which numbers can go in now and work as quickly as possible to extend the range.

Respecting the environment is everyone's business. Contamination? Not in my back yard.

Welcome to Improving with Age 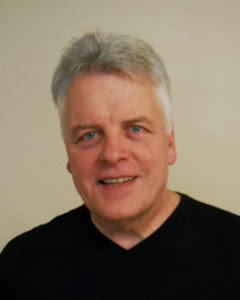